The story of the unemployable English major is both powerful and damaging, since students are more than ever concerned that their choice of degree will lead to successful employment—reasonably so considering the lingering effects of the recession and the high cost of postsecondary education in the US. Hence it behooves us to counter the belief that English majors can’t get a job. Indeed, both institutions and individuals have begun to push back on that story. For example The Atlantic’s boldly titled article from June 2013, “The Best Argument for Studying English? The Employment Numbers,” points out that employment statistics for English majors aren’t really that different than from other fields—especially when compared to other fields in the liberal arts such as in social science as opposed to “truly pre-professional fields—including health, business, and education.” The author of this piece concludes, “Bottom line: If humanities departments really want to win students back from the clutches of political science and econ, they’d be smart to start by showing them the employment stats.”

I mostly agree with this author. We do need to show the employment stats. However, I’m uncomfortable trying to “win students back from the clutches of political science and econ.” Those are important majors too! In addition, having worked for some time with “the employment stats,” I do not think it as obvious as the author of this article to know exactly how to go about doing so. For the remainder of this post I’d like to outline some of the resources we have to make our case, as well as some of the limitations of these resources.

There are two main research groups that produce these numbers, the Hamilton Project of the Brookings Group, and the Georgetown Center for Education and the Workforce. (For Georgetown, see especially the report The Economic Value of College Majors.)  Both groups use a detailed census survey called the American Community Survey, often abbreviated ACS.  Unlike the decennial census survey with which we’re most familiar, this survey is conducted and reported on annually.  (A third source, at Payscale.com, uses data volunteered by people who go to the site, rather than data collected randomly, so I am leery of using it.)  Of these two sources, I find the Hamilton Project particularly useful–though it hasn’t been updated as recently as Georgetown’s information has.  The first visualization in the interactive feature accompanying the report allow users to compare average earnings over time across different majors. One can see, for example, that Communication and English majors have practically the same average earnings over time, and that Business majors have higher earnings—but, at between 10 to 15 thousand more per year, the difference is not one of orders of magnitude from what English or Communication majors make, as some myths about English major underemployment or unemployment might suggest. We need to remind prospective students and their parents that earning a college degree typically makes a much bigger difference in earnings than does the difference among degrees earned, as a comparison of any of the degree holders’ earnings with high school diploma only earners will show.

Even more important are the earnings data shown in the second visualization on the site. This graph looks at earnings not as averages, but as they are distributed over a lifetime from the lowest to highest earners among each set of majors.   Averages can be misleading. Suppose you decide to major in business because on average business majors make around 10 to 15 thousand more each year than English majors do. But what if you hate business, and have no head for it, while you’re a very good reader and writer, and love the study of English? It would probably be better to end up a successful English major than an unsuccessful business major. For example, at the 50th percentile, business majors make about 300 thousand dollars more than do English majors over their lifetimes. But an English major in the 70th percentile of English-major-earners will make around 500 thousand more than a business major in the 30th percentile for that major.   Business and English majors at the 45th and 59th percentiles respectively have about the same lifetime earnings. That is, one only must do somewhat better in English than one would do in business to earn the same amount.   The lesson here is that following your heart may not only make you more happy, but also be a good career investment.

These are wage statistics. Neither the Georgetown Center nor the Hamilton project present the data on the relationship between major and occupation. What do students with a degree in a particular major go on to do? This data is available from the ACS too, but I think both groups don’t report on it because it’s too granular. It’s relatively easy to rank 138 majors by median annual salary, as Georgetown does. But showing the distribution of occupations from a particular major would be more like creating an ideas book—something to leaf through major by major, but hard to compare or rank majors. If you’re only interested in one major, however, this data is not too granular.

And, best of all, it’s positive. One particular danger of salary rates as metrics is that English will never come out ahead in them. The data isn’t as bad as the popular myth has it. But we’ll never beat accountants or petroleum engineers. Providing wage statistics buys into that whole new way of thinking about the college major as “return on investment.” On the other hand, presenting typical occupational outcomes for the major doesn’t ignore our students’ concerns about employment, but it also allows them to imagine a life, with career conceived of as an interest and a vocation, rather than as the generator of a 7 vs. 8.4% return on investment.

Since Hamilton and Georgetown don’t provide information on careers by major, I’ve produced this kind of report, using the same ACS census data that these organizations do.  Here are the results. 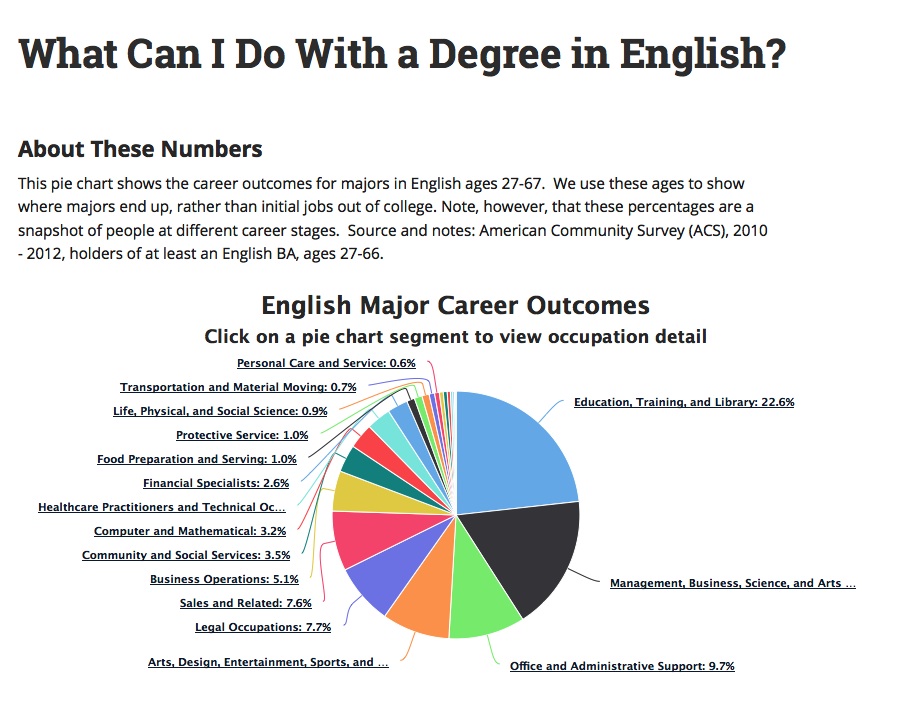 Note: Clicking on the picture will take you to a live version of this chart, where you can click on slices of the pie to drill down on occupational categories to see percentages of particular jobs within those categories (you can also see the percentages that aren’t visible on this picture).

Not surprisingly, the biggest portion of students with a BA in English go into the teaching professions, at 22.6%.  Another 17.2% go on to work as managers of some sort.  It’s worth noting that 3.2% end up in computers and mathematics, while only 1% end up working in food service.  To the myth of the English major barista we can say, you’re three times as likely to being working with computers or math than in any kind of food service profession!

One more chart might be of use.  This one, using the same ACS data, compares majors by broad occupation category in a heat map. 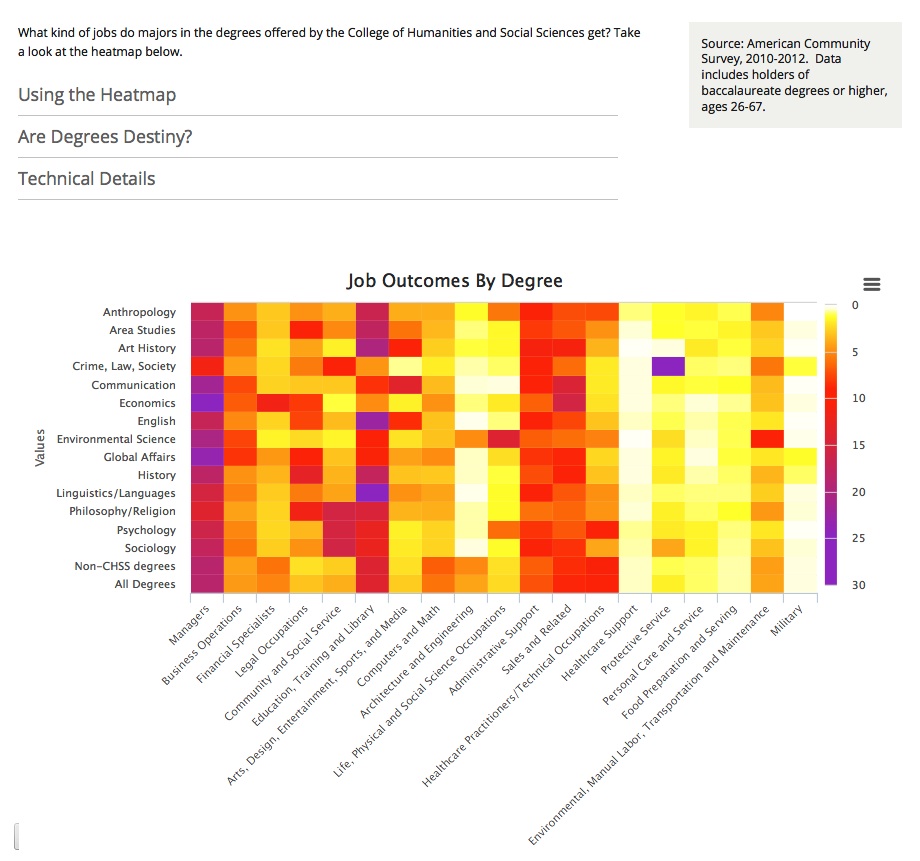 Note: Clicking on the picture will take you to a live version of this chart, where you can scroll over the heat map to see numerical percentages.  The individual majors listed are the degrees offered by the college to which I belong, the College of Humanities and Social Sciences at George Mason University.  “Non-CHSS degrees” are all the degrees our college does not offer.  “All degrees” are all the degrees categorized by the US Census’ American Community Survey.

The takeaway?  Again, there is much more similarity in the occupational futures of BA holders than there are differences.  Students should study what they love, work hard, learn a lot, and they will find employment success.  We have become so vocationalized in our thinking about higher education that we have come to believe that a major is a career.  It is not.

0 replies on “What Can I Do With an English Major?”